"I love to see miracles happen every day."
When Dr. Godwin was 12, his mother had a heart attack. As a single mom with no insurance, she didn’t get the help she needed. Dr. Godwin decided he wanted to be a doctor so he could help others.

His anatomy teacher was a chiropractor who told stories about his office. It interested Dr. Godwin. After joining the military, he had a medical-based position that reignited his passion for health care. He decided to attend chiropractic school.

Dr. Godwin went to Parker University to obtain a Doctor of Chiropractic. Since he didn’t grow up going to the chiropractor, it wasn’t until he began attending the college that he learned about the power of chiropractic. While there, an old shoulder injury from his military days started to worsen. The VA Hospital suggested surgery that would take him out of school for four months.

Instead, Dr. Godwin worked with a chiropractor on campus who showed him how to do structural work. “I rehabilitated my own spine and got my shoulder back to full function.”

In practice today, Dr. Godwin addresses your body’s structure and supports your lifestyle with useful advice and a range of additional services. He is also certified in the Webster Technique for pregnant women.

Involved in the Arlington Community

Dr. Godwin is originally from Virginia. He lives in our community with his wife and three children. When he isn’t in the office helping patients, he loves to read (between 50-100 books a year!), travel and go to the gun range.

In each of the past seven years, Dr. Kenyon has been named an All Star by the Arlington Today readers.

This year, he earned the distinction in three categories. 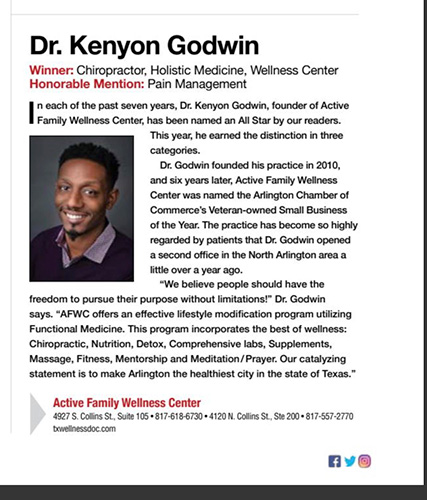